In this post, I will demonstrate a simple method for creating good guitar tones using filters and nonlinear distortion.

Most of us fall too often in to the habit of talking about tone, and as the saying goes: "writing about music is like dancing about architecture", so I will instead start with some example tones, then talk about the pros and show how I do it.

This is what I would call a »crunch» tone.

More high gain, I guess a »metal» tone of some sort.

This is in no way a novel technique but more of a clearer/cleaner alternative to the opaqueness of guitar pedals, amps and simulations of thereof.

But maybe the best thing is that with the proliferation of DAWs that come with plugins this effect chain is easy to implement and available for many platforms OOTB. Hell, I have even done this in VCV-rack!

For the amp all you need is a parametric EQ, high and low pass filters and some nonlinear saturation effect.

For the cabinet I will use an impulse response since the frequency response of a cabinet and microphone is a lot more time consuming to replicate than the filters and toneblock of a guitar amp.

Anyways here is how I do it with x42-eq, my WIP distortion plugin and convoLV2:

I like the marshall kind of amps where the stack consists of eq -> pre drive -> eq -> post drive. So, I will start with a filter that cuts bass below 400Hz, boosts the highs around 1kHz and then cuts anything above that: 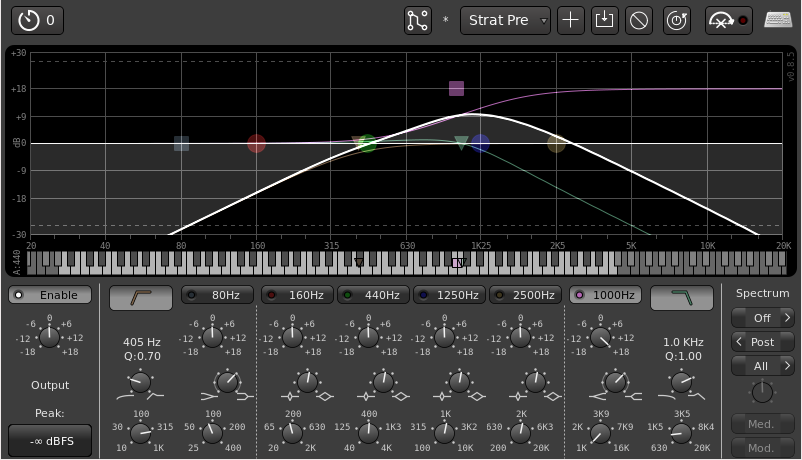 Next up is the pre distortion. This is the bread and butter distortion for any »modern» guitar tones. In my plugin I have controls for the drive level and also a control for how asymmetrical the drive is. The asymmetry adds some even harmonics. The amount of distortion should be set to taste. 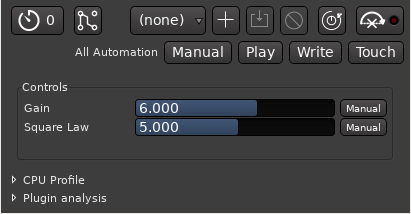 After the first drive I like to have a toneblock. A pretty normal guitar amp toneblock consists of a high-pass, low-pass and band pass filter. So I keep my second filter fairly minimal. Cut below 80, cut above 7-8k and cut around 500-800Hz.

The choice of mid frequency depends somewhat on the pickups and preference. I go with 550ish for my Harley Benton Dullahan (humbuckers) and like 760ish with my Tokai Goldstar Strat (single-coils).

The second drive gives the feeling of a cranked up amp. I use it more as a sort of compression rather than for distortion since the effect can be really »bassy» and not »tight». 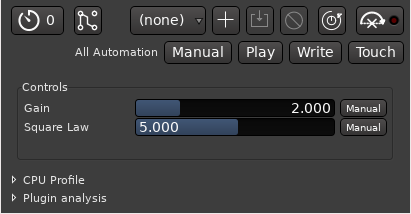 Last in the signal chain I have my impulse response. This will make a night and day difference on your tone, but it will not save a shitty tone. A good IR will complement a good signal fed into it.

I have been using the Little Cubes IRs from David Maxim Micic. I have no particular reason for this, I just like his tones. The one I used here is the PVD212 Mix1.

And that is pretty much it. You can also add reverb and delay on top obviously. Use an autofilter for a wah effect, expander for gate...

There are better tutorials out there for a lot of concepts, but this was just the sort of thing I had not seen anyone do or get convincing tones with so I had to write it down just in case someone else might find this helpful.

Now, go have fun experimenting with these ideas! :)